The BCX Ultra stands out from ALL other rife machine manufacturers in how it generates waveforms. Other manufacturers will use a DSP (digital synthesizing processor) which is only capable of generating digital Square waves. By using “filtering” techniques, these other rife devices’ circuits are capable of mimicking a Sine wave by “rounding off” the Square wave.

The BCX Ultra uses completely different electronics by using 3 separate Microprocessors. Each microprocessor creates an ‘Arbitrary Waveform’ that create exact creations of naturally occurring and incidentally occurring waveforms. Naturally occurring waveforms are Sine, Square, Triangle, Exponential, and Linear. Incidentally occurring waveform examples are the Hoyland Waveform, Odd Order Harmonic and Even Order Harmonics waveforms. The BCX Ultra rife machine reproduces the Hoyland waveform that was created by digitizing an actual copy of Hoyland’s test data. The Odd Order Harmonic Waveform produces a fundamental, and the 3’rd, 5’th, and 7’th harmonics is perfect harmonic proportion. The Even Order Harmonic Waveform produces a fundamental, and the 2’nd, 4’th, and 6’th harmonics in perfect harmonic proportion. With Arbitrary Waveforms, the BCX Ultra rife machine is capable of producing ANY waveform accurately. Harmonics can only be generated accurately if the fundamental waveform is accurate.

This is why wave types are imperative to killing off organisms.

“Here’s an analogy describing how these various wave signals perform, and how the body physically responds to hem. If you put your hand on someone’s back and exert a steady pressure, she will shift her weight and learn to compensate for your push. The relatively slow rise and fall times of a sine wave gives the body a chance to recognize, make adjustments for, and eventually ignore the signal. If, however, you suddenly push that person with the same amount of pressure, she will fall. The sudden thrusting quality of triangle and sawtooth waves takes the body by surprise. Similarly, the rapid rise and fall time of a square wave does not give the body a chance to compensate. However, the flat top line of a square wave means that after the body is taken by surprise, there is a relatively long period when the signal is steady. The body (and microbes) may or may not reject the signal. The shape of the wave is important not only because of the rise and fall times of the energy. The wave shape is also important because of the harmonics it produces…. ” Nenah Sylver, PHD – The Rife Handbook (2011 Edition)

For example the BCX Ultra hand held ray tubes delivers 30 watts peak power and the BCX Ultra BT-HFPCM2 stand alone beam tube delivers peak power of  150 watts. All waveforms except square will degrade the power to some extent, and if there is a frequency (which there always is with the rife machine), the average power will be 1/2 because 50% of the time, the hand-held raytubes will be off, and 50% of the time they will be on. For PEAK power  of 30 watts, the AVERAGE power is never greater than 15 watts. HOWEVER this is where the misconception lies. The industry standard is to state power with the AVERAGE power during a cycle HOWEVER what is ‘important’ with rife therapy is the PEAK Power.  Other manufacturers use the Average Power as their supporting argument why BCX Ultra other wave types (ie pulsating square, sawtooth, trapezoid, etc. ) are not effective misconstruing the wave type power delivery and the hand-held ray tubes delivery   In the case of the rife machine, peak power is what counts when delivering a frequency wave type. Why? For example, when at the peak of the square (which is where 100% power delivered as fast as it can for that frequency) is the goal to get a strong/fast surge to perform a kill off of the organisms then it stays at that power at that frequency and then turns off .. In the case of the square wave it turns on 100%  (30 watts) and then turns off power to 0% power (which will be 0 watts) so then taking the average of the ‘on’ power and the ‘off’ power will be 50% of its full power it is capable. With the other wave types ((ie pulsating square, sawtooth, trapezoid, etc. ) will have even more on & off times making the average watt  power less but again the peak time (which is full or ~ full watt delivery) when the surge occurs. 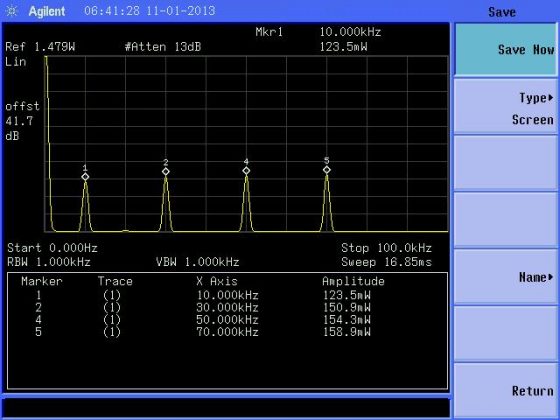